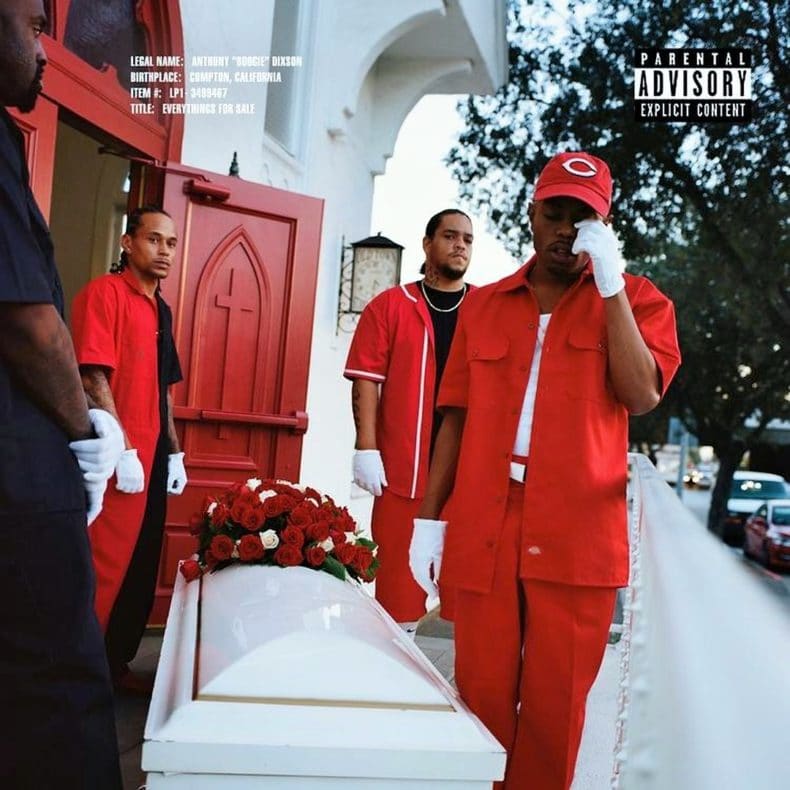 Boogie is a new artist for Shady Records. His new album is decent but, at times, boring.

Everything’s For Sale focuses on the negative side of relationships.

The jazzy production is similar to recent albums by Saba, J. Cole and Noname. Features by J.I.D., Eminem and 6lack add life to the album at times when the content is too serious or monotone.

That is not to say that Boogie’s performance doesn’t hold up. Poetic performances on tracks “Tired Reflections” and “Whose Fault” are a refreshing break from the common rap topics of Material Possessions and Sex. They are also emotionally and artistically great songs, conveying ideas and stories in a interesting way that we can relate to.

Boogie raps in a straight-forward, almost poetry-slam style on Everything’s For Sale. He also sings quite a bit, including 2 almost entirely R&B songs (Skydive 1 & 2). It is essentially a break-up album, with a few singles to sell units.

His subject matter mostly consists of insights about modern relationships.

Situations we have all been in. Long text messages he didn’t reply to for weeks. Wishing his girl would just break-up with him without warning. “Fuckboy tendencies.”

The post break-up baby-mama drama in “Whose Fault” is Boogie’s highlight of storytelling. An argument that turns into a separation, and the fallout that comes after. Go pick your son up. Get your new man to do it (even though he misses his son but his anger won’t let him act right). The song ends with a revelation that is simple, but hard to act out: “Don’t look for change, be the change.”

A more descriptive vocabulary would have been more suited to this album.

Rather than the plain-spoken style that he uses in every song. Using more words that put images in your head. He speaks in abstractions that we can’t picture. Love and hate are great, but a smile and a frown are things we can see.

Something that every rap album could use, but sadly is type cast to the street rap and funny rap lanes, is wordplay. That is something that Eminem understands that Boogie doesn’t.

“Like a Shepard havin’ sex with his sheep, fuck what you herd…” is not Em’s best wordplay. But even that one line hits harder than 3 insightful quips meant to make you feel sorry for the rapper. Then he follows it up with “I’d have to be Dracula’s sidekick… to be down for the count.” lol

A more complex rap style, with a faster cadence or syllables per beat, would have benefited this album. The way it made Saba’s Care For Me a more compelling listen. Not because it shows that he has “skills”, but because the beats are so lowkey and jazzy that a in-your-face flow would stand out. Livening up the, sometimes, bleak tracklist.

When Boogie speeds up the flow in the second verse of “Self Destruction” it’s a nice break in the clouds from a slow-drawl he does in the rest of the song.

His flow in “Soho” shows as much. But it pales in comparison to J.I.D.’s second verse. Jid’s voice commands the beat more. His rap chops the flow up more, it’s faster. It’s more unpredictable. When the beat changes to a more emotional tone, Boogie shows his real strength.

Boogie structures his songs with a modified Verse/Chorus form, with skits and interludes within the songs. The singles are much more conventionally-structured than the B-sides, it goes without saying.

I think the reason that most of the songs use a typical pop music structure, is because the songs are minimalist. Meaning, the artists fear that a more adventurous structure will make the songs less popular. Adversely, I think that a more experimental attitude would have suited this album.

Choosing a minimal topic and then hedging your bets by using a ordinary structure seems noncommittal, overly cautious. An attempt to appease label execs hungry for a cross-over success. If that’s the case why not use beats that are more commercially-driven? If you are trying to be avant garde, commit to it, embrace it.

Adversely, the singles on this album sound better than the non-commercial records. A rap album doesn’t need to be a literary classic, or a pop record. It just needs to be hiphop.

The singles sound better because Boogie chooses his proper lane, a West Coast Hiphop sound. “Silent Ride” sounds like a lowkey DJ Quik cut. Except that he keeps to the prevailing theme of the album, a great choice that leads to the best song on the album.

The songs that veer closer to R&B and Jazz lose the tight focus that the singles have.

“Skydive II” is a R&B song with a slow verse in the middle. Boogie spends most the track singing next to 6lack, someone who has a fantastic voice. Boogie’s singing voice is only just passable. The R&B records are attempts to expand his audience to R&B fans. Trying to reach different audience is a good plan, only if you can do the new audience justice..

If you are in a bad relationship, if you are going through a break-up, buy this album.

This is a category where the singles and collaborations don’t help. An Eminem verse won’t bring any emotional authenticity.

All jokes aside, a guest artist is usually not privy to the ideas of the album they are contributing to, so they can’t continue the narrative. That is probably why J. Cole doesn’t have any features on his albums. He wants to maintain control over the entire idea without diluting it.

The most emotional points on the album are the parts where we are surprised by how the story events have turned. Like when he says “I’m tired of questioning if God real, I wanna get murdered already…” then he is interrupted by a gunshot.

The parts that are the least authentically emotional are when he is trying to be overly emotional. The R&B songs again.. “Swap Meet” is a simple song. An R&B song with a half-rapped, mostly sung verse in between a repeated refrain. My rating system will not allow me to rate non-rap songs or skits. And that is a good thing for Boogie in this instance..

“Silent Ride” is almost a classic song. “Soho” as well. Download “Rainy Days” for the Eminem collab. For interesting concepts and stories check out “Tired/Reflections” and “Whose Fault”. You will probably hear “Self Destruction” on a blog site.

This is an album you pick apart for it’s good songs and leave the rest. Unless you are already a fan. But I probably wouldn’t buy it. I think Boogie’s next album will have more commercial, club and street records when the sales of this album don’t measure up to projections and budget. Shady Records probably allowed Boogie plenty of freedom, just to sign a rapper with a burgeoning fanbase to ensure sales in the future. But that is all conjecture..

by Mo La Rock on February 1, 2019
Slammin’. A gangster rap classic of 70’s blaxploitation soul hip hop. This album was supposed to be titled “Cocaine Piñata”. Or so it was called before the album was released. Hence the zebra stripe design on the album art. [...]
Comments
Leave a reply