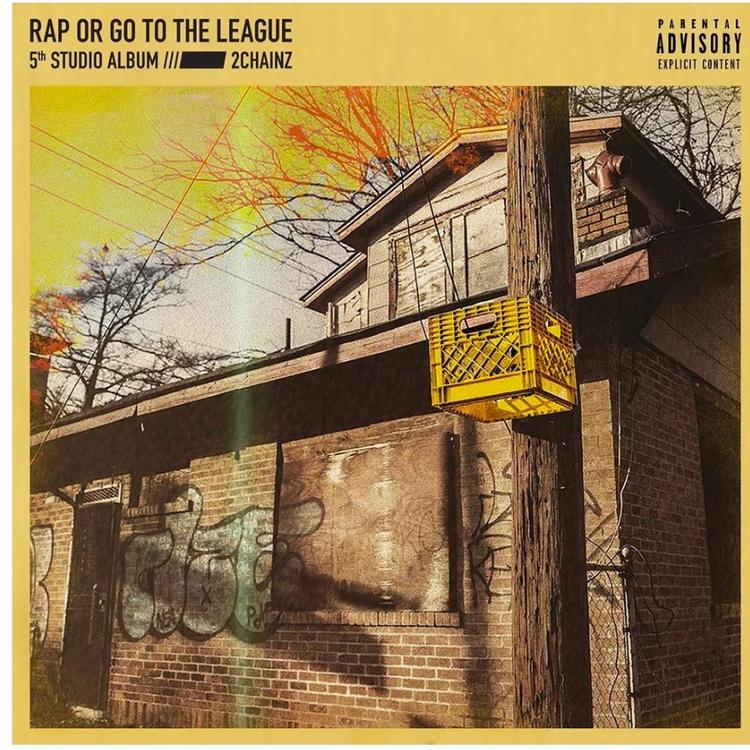 After Pretty Girls Like Trap Music got great reviews, there was big expectations for the follow-up. 2 Chainz lives up to the hype.

“Stayed in the streets like it’s room and board, they knew me for it/ That’s beside the point like a shooting guard, I’m moving forward/ Had aspirations of college ball, I done it all…” (“I’m Not Crazy, Life Is”)

Rap? Or go to the league? I think he wanted it to be called Trap or Go To The League. It’s speculation, but still.. Maybe he softened it because of the labels? Nonetheless, that choice is the subject of many rap songs.

“Because the streets is a short stop/ Either you’re slinging crack rock or you got a wicked jumpshot.” -The Notorious B.I.G. ‘Things Done Changed’

It’s also the theme of this album. When 2 Chainz fully commits to the idea he achieves excellence. Especially the socially conscious “Forgiven” and the critique of Capitalism, “Sam.”

The details of 2 Chainz’ life shows us who he is. Coach Outlaw taught him the B.E.E.F. method. That’s: Balance, Eye Contact, Elbow Room and Follow-Through. That’s the key to his jumpshot. He served Rappers like Lil Jon, Young Buck and Rick Ross before the Def Jam deal.

Rich in detail, but not deep lyrically.

Kendrick, Chance, Thugger, E-40 and Wayne (an impressive list of features, still,) all show up and body 2 Chainz on his own shit. “High Top Versace” is basically a Young Thug song featuring 2 Chainz.

2 Chainz should never simplify his flow. “NCAA” has terrible lyrics. That song needed some triplets or something. He provides details but the scene isn’t vivid. I come to a 2 Chainz album expecting great wordplay. He got a few, but nothing quotable in the long term.

Every song on this album that has a feature is greatly helped by the other rapper. Except for the first 3 songs. 2 Chainz holds his own on “Forgiven”, “Threat 2 Society” and “Money In The Way.”

Lil Wayne’s flow on “2 Dollar Bill” is sick. They got Weezy sounding like Tha Carter II. And Kendrick’s delivery on “Momma, I Hit A Lick” is the best part of that song.

2 Chainz has a decent flow. He doesn’t play the melody game that Travis Scott does. At times, 2 Chainz’ voice is a little monotone. A little dead. He doesn’t use complex patterns. He doesn’t ever go double time.

Since 2 Chainz is a commercial artist, he keeps the song structures simple, hoping to get club play and mainstream radio. When he sticks to a theme, the songs sound more cohesive. “Forgiven” is the best song on the album. Mixing dope boy lifestyle with a socially-conscious message.

“I’m Not Crazy, Life Is” is a great song. Chance’s verse is simple, but deep. If you really pay attention, the way he structures his bars is complex. Using rests, and crossing the bar line, more complex than anything that 2 Chainz does on the album.

There seems to be a trend of songs that sample rap classics.

Meek Mill sampled a few classic rap songs on Championships. Most notably he flipped Biggie’s “What’s Beef” for the Jay-Z and Rick Ross featuring “What’s Free.” Both 2 Chainz and Meek Mill flip “Dead Presidents” by Jay-Z (“I Said Me” and “Respect The Game” respectively). I don’t know how I feel about this. Just an observation for now. Until it becomes too common, then it is wack.

2 Chainz has been through some shit. The second verse of “Forgiven” is a story about his friend since school, Lil Fate. Somebody shot his son. And 2 Chainz doesn’t know how to help his friend..

“Sam” uses emotions in a different way. 2 Chainz talks about how the government taxes you. About how taxes are good and bad at the same time. How they pay for bridges and shit. But they don’t pay for the cops that kill a black child holding a cell phone, not a gun.

“Sam” has a nostalgic feel. Because it samples “Hi-Life” by UGK (My favorite UGK song). It sounds like the original trap music before they added 808 drums. It is the perfect way to end the album.

Good album from 2 Chainz. The only songs I don’t like are “NCAA” and “Girl’s Best Friend.” But the latter is a modest hit, and the former is a potential hit. So you can play the whole album without skips, pretty much. I think that says a lot about the album.

Check out “Forgiven”, “Threat 2 Society”, “Money In The Way”, “2 Dollar Bill”, and “I’m Not Crazy, Life Is”. The biggest stand outs on Rap or Go To The League. I wouldn’t buy the album but a gave it a bunch of spins on Spotify. Enough said.

by Mo La Rock on February 1, 2019
Slammin’. A gangster rap classic of 70’s blaxploitation soul hip hop. This album was supposed to be titled “Cocaine Piñata”. Or so it was called before the album was released. Hence the zebra stripe design on the album art. [...]

by Mo La Rock on January 26, 2019
Boogie is a new artist for Shady Records. His new album is decent but, at times, boring. Everything’s For Sale focuses on the negative side of relationships. The jazzy production is similar to recent albums by Saba, J. Cole and Noname. Features by [...]
Comments
Leave a reply