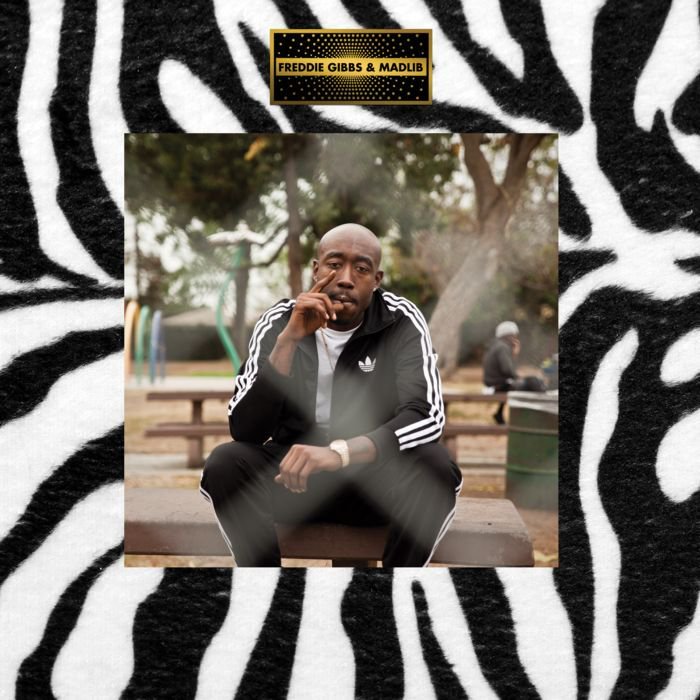 This album was supposed to be titled “Cocaine Piñata”.

Or so it was called before the album was released. Hence the zebra stripe design on the album art. Indicating that the album is the piñata, and the contents are the drugs. The music is cocaine. Clever.

This album is a real rap purists wet dream. Freddie Gibbs’ gangster flows over some of the rawest Madlib beats. The album was foregrounded by three of the best songs on the album: “Thuggin”, “Shame” and “Deeper.” These 3 singles built anticipation for the album before it was released in 2014.

The problem with Gangster and Drug Dealer lyrics is that they can be empty.

Just as devoid of substance as the sex and money tropes you hear in most rap songs. Freddie Gibbs avoids these traps by telling stories to make the lyrics more complex.

Freddie Gibbs is a master MC. He really sets the scene in “Harold’s”. I feel like I was really there at the chicken spot in Gibbs’ home town of Gary, Ind. “Six Wings, Mild Sauce/ and all the fries you can give me..” Shout out to Next Friday.

Gibbs trades mostly in poetic gangster imagery instead of jokes and metaphors.

Most would think that this strategy is a weakness in compared to more crowd-pleasing rhetoric, like the frequent wordplay of Big L, for example. But the title track places him beside some of the best artists of this era and he still comes out ahead.

Domo Genesis uses a more complex rhyme scheme. Sulaiman has a more intricate flow. Mac Miller has better references. Meechy Darko and Casey Veggies use their voices in more animated ways. But they all rap in a stream of consciousness manner that pales in comparison to Gangsta Gibbs’ crime story raps. Just rapping about how good you rap doesn’t give your verse a sense of purpose. But telling a story always leaves us waiting for the end. It adds context to your content. Even when Earl Sweatshirt relates his life experiences in a storytelling fashion on “Robes,” Gibbs switches lanes to a braggadocious drug rap, even using an off-key singing flow for a bar.

Freddie Gibbs has a flow that sounds straight-forward, but is laced with internal and multi-syllable rhymes.

A true rapper’s rapper. Sometimes he simplifies the flow. Like in “Deeper” or “Broken”. He sacrifices a complex cadence for clarity, to communicate the stories more clearly. But, he is truly at his best when the beat runs at a faster tempo. Instead of putting less words in a bar when the beat is fast, Gibbs will try to fit as many syllables in one line as he can. The epitome of what it means to be lyrical.

“Shitsville” is a prime example. Madlib’s rapid chord progression is matched note for note by the lyrical flow. As he expounds on his various flaws, he slows it down for the refrain, “just. like. me.” Then he goes back in..

Another good example is “High” featuring Danny Brown. The two MC’s don’t have to rap fast. They could choose to do a laid back slow flow and slide by. Instead they choose to body the beat, and the song is better for it. And that’s word to Danny Brown for matching Gibbs’ energy, he’s a beast.

This album could be considered traditional Boom Bap. And that is why much of the songs use a standard single verse or verse/chorus form. The Thug, drug dealer themes lend the album a unity most abstract or pop-type rap albums don’t have. That is the strength of choosing a lane in hip hop.

Another prevailing theme throughout the album is the weakness of most rappers and drug dealers in the game. “Real” expounds on this topic, quickly focusing his sights on Young Jeezy. They had a falling out after Gibbs left Jeezy’s label CTE, in 2012. They beefed for years. Right up until 2017 at least.

The beat switch in “Real” is surprising, and the dangerousness of the lyrics that follow score extra points for songwriting. At first I thought the disses were subliminal. Not referring to the subject by name. But he refers to Jeezy as “snow,” so it’s somewhere between subliminal and an outright diss. Gibbs says the reason they fell out is because “I refused to be his flunky, so we don’t kick it no more.” He also sites “a fuck-ass contract” and calls Jeezy weak, “shook.” This is one of the most underrated diss tracks of all-time. Snowman killa.

The blaxploitation aesthetic chosen by Madlib is perfect for Freddie Gibbs. Using film soundtracks where the hero is the pusher, the gangster, the pimp.

The soul samples used for the beats create a nostalgic feel that is reminiscent of the boom bap era.

Recalling beats by Pete Rock, DJ Premier, Large Professor and Diamond D. Madlib built this album around 3 beats. The 3 main singles. When you have beats this great, if you can find beats that sound the same you got a recipe for success. The beats for “Bomb” (with Raekwon), “Shitsville” and “Pinata” are all almost as good. “Deep” is a great beat too, and the title suggests that it is a prequel to “Deeper.”

Although there is some filler, you can let this album play from the beginning of “Deeper” all the way to the end of “Broken”. 10 uninterrupted songs. That is more songs than Illmatic.

Relating your life experiences in a vivid way makes people feel like they are you.

That is how you make the audience relate. On “Broken” Gibbs says “Granny found my dope, I told her I would stop for selling it/ Nigga please, she knew I was lying before I even spoke it.” I felt that. “Surviving off cold cuts and cold Spam/ Can’t see eye to eye with my old man/ Hiding my insecurities with this gang flag/ We both despise the police but he wore the same badge.” It’s sort of an origin story.

Scarface kicks a verse, not his best, but just his mere presence on the song lends it some authenticity. It reminds me that Face is the father of the introspective drug dealer rap style. Freddie Gibbs is just the next in a long line, and he adds a much more lyrical style than his predecessors.

The most emotional song on the album is “Deeper.” A story about Gibbs’ relationship with a woman. He goes to jail. She finds a new man. He gets out of jail. They resume the relationship even though she has a man now. The song is even more emotional because of the surprising turn of events at the end of every verse.

Culminating in the final revelation. She’s pregnant. What is her new man gonna do? All she can do is “pray that he forgive/ when he find out the baby ain’t his, that cut a nigga deep..”

So what you sayin’ baby? Whose is it?

This album will feature highly in the “Best Albums of the 2010’s” list. Whenever Madlib teams up with a lyrical Emcee, the result is always incredible.

It’s not a perfect album. This album is as flawed as an album can be while still remaining a classic. At 21 tracks, this album is a little long. Even without skits and instrumentals it is still 17 full songs long.

If you drop out all of the songs that scored less than 17 out of 25, you still only lose 3 tracks. But it brings the average up to 19.71 out of 25. If you made this into a 7-song Kanye West album the entire project would be classic songs. Put within that context this becomes one of the greatest albums of all-time. Try listening to it this way, same order the songs appear on the album:

by Mo La Rock on January 26, 2019
Boogie is a new artist for Shady Records. His new album is decent but, at times, boring. Everything’s For Sale focuses on the negative side of relationships. The jazzy production is similar to recent albums by Saba, J. Cole and Noname. Features by [...]
Comments
Leave a reply